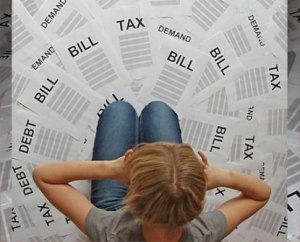 Most of us in the West are socialised into a permanently conflict-ridden relationship with money, in which we often feel trapped by our conflicting emotions.

But beyond that narrow space limited by our habitual emotions is a whole world where other things happen.

Not paying your debts

The fear of not being able to pay our debts looms large in the Western psyche.  The English-speaking world has its legacy of slums, debtors prisons and workhouses horrifyingly described by Dickens and others.  But late nineteenth century liberal responses to these horrors changed bankruptcy from a very public shaming for moral turpitude to a benign legal and administrative device to forgive debts and allow the debtor a fresh start.

Like no-fault divorce, the attitude behind bankruptcy legislation is that things don’t always work out well despite people’s best intentions, and the wisest attitude is simply to set people free with no blame to start again.

Certainly most people who go bankrupt feel a great deal of shame, guilt, remorse and fear.  And credit agencies, friends, colleagues and family often subtly reinforce these feelings in subsequent years. Bankruptcy is not a small step.  But the point is that there is life beyond “going bankrupt”. It’s not the end of the world.  It’s simply the end of one phase of life and the start of another phase of life, another type of life, another style of life.

Two friends who have been through bankruptcy, both men, say that going through the process forced them to confront and dismantle their unconscious attachment to being a breadwinner, a ‘successful businessman’ and indeed their attachment to a narrow form of masculinity.  At the emotional/psychic level, for each of them their bankruptcy was an ordeal by fire – as we would expect given our tortuously conflicting emotions about money.  But each is now more free, with a richer and more autonomous sense of self. And – they are free of debt.

Nichole Gracely became homeless after she left her shockingly bad job in an Amazon warehouse and was not able to find another one.  She started begging on the streets: “I did not simply perish when I lost all sources of income and could no longer afford to pay the bills. A survival instinct that I didn’t even know I possessed manifested itself. I learned to live without money and without a home.”

It isn’t easy: she’s “…learned that it’s best to keep moving. It’s not easy to start up anywhere with absolutely nothing. … It takes tremendous strength to get through a day.” But “There’s more respect for a homeless woman out on the streets than there is in a warehouse for Amazon workers.”

Gracely shows us that beyond what most of us consider to be a total catastrophe, the end of “life as we know it”, is a whole world – certainly a very different life, but still a life.

Being homeless is not necessarily a desirable goal, or necessarily an easy way of life. But the point is that there is life beyond our fear or shame about not having a home.  And especially that there can be more dignity in being homeless than staying in an immoral or soul-destroying situation.

The above two stories of disruption seem to support the cultural story that there is not enough money to go around – that we have to battle to make ends meet .

But despite our culture of fear and tightness around money (or because of it?), there is a very well-established pattern of people having money – huge amounts of money – thrown at them.

The apocryphal example is JK Rowling. Here is a single mum telling bedtime stories to her kids, and people start throwing hundreds of millions of pounds at her – all for telling stories that apparently hit the spot for millions of people.

The phenomenon of celebrity is based in this:  people can become famous, with the associated wealth, simply because they hold something on behalf of millions of people – often something quite ephemeral like a personality trait or a story line.

JK Rowling’s experience disrupts the story there is not enough money, or that it’s hard to come by. This makes it clear “not enough and work hard” is just a story – actually, one of our culture’s foundational stories about money.

Believe any of our culture’s money stories are true and you can find support for them everywhere.  This is how culture works.

And also, like all our stories about money, there is a whole world beyond it.

Let's chat about your accounts